Female entrepreneurs are everywhere; they operate in all industries and on all continents. Some are even household names - you only need to tune into BBC One’s Dragon’s Den to see Deborah Meaden and Sara Davies showcasing what it is to be a successful, self-made woman in business.

Business creation is a vital tool to running a successful economy, and women play a major role in this. A recent report by network the Global Entrepreneurship Monitor (GEM), which quizzed female entrepreneurs from 43 countries, found an estimated 274 million women are involved in business start-ups, some 139 million own or manage an established business, and 144 million women globally are informal investors.

It also found nearly a third (30.2%) of female entrepreneurs surveyed expect to hire six or more employees in the next five years – an enormous boost for the global economy.

Meanwhile, separate research from consultancy Deloitte estimated the number of women-owned businesses now account for between one-quarter and one-third of all enterprises worldwide.

Gone are the years of men ruling the roost in the business world; women make up a significant proportion of those creating jobs, new products, brands, and innovations. Women have been responsible for inventing some of the most useful products; it was a woman who invented the life raft, bullet-proof fibre, the first game of Monopoly, and even the first dishwasher that used water pressure. We simply cannot afford to miss out on female talent when it comes to entrepreneurship.

The past two years have been tough for women, however. A report by the OECD reveals that the Covid-19 pandemic impacted women’s incomes disproportionately hard compared to men. This can in part be explained by women being more likely to operate in harder-hit sectors like retail and household services, and their businesses being less likely to operate online. Women also take on a disproportionate number of care duties at home, meaning there is less time for them to focus on their business. 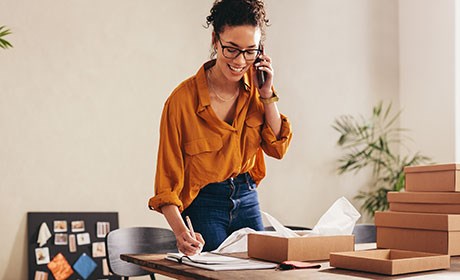 An exciting time for change

Nevertheless, the future looks bright for female entrepreneurship. For example, women could lead the charge on climate change and going green. Technology firm Certified Sustainable cites academic evidence that suggests female CEOs are more likely to run environmentally friendly firms. In the world of entrepreneurship, this spells good news for women, as potential investors are becoming more attuned to the low carbon economy of tomorrow, and the products and businesses that will help us to get there.

To empower women and celebrate all they are capable of, we will soon start our series of International Women’s Month webinars: Conversations That Matter. In our first webinar we will be joined by Jo Fairley, co-founder of Green & Black’s Chocolate who will talk to us about her incredible personal journey as one of the UK’s leading female entrepreneurs. These webinars offer women the chance to learn about business and finance, and ask our professionals, as well as Jo, any questions. To register, click here.

Exploring the key ingredients for successful investing and how we can help you on your investment journey.

Exploring how financial wellbeing has a direct physical impact on all of us as individuals but can have a particular impact on women.

We explore how a woman’s relationship with money is formed at a very young age.