A growing number of economic indicators are signalling a slowdown in activity, with central bank actions aimed at curbing the highest level of inflation since the early 1980s providing a major headwind to growth.

Calls among leading economists and forecasters for a forthcoming recession are growing ever louder. 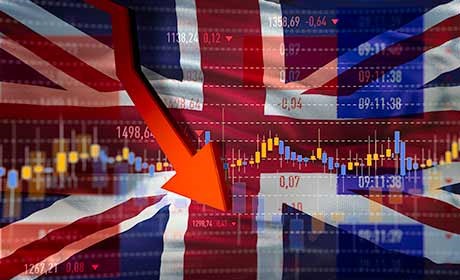 While there are important structural differences and current pressures in the UK, Eurozone and US economies, broadly they are all facing similar issues. Of the three, the UK economy is perhaps the most vulnerable with quarterly GDP in the second quarter of the year expected by many economists to miss the Bank of England’s expectations of 0.1% growth – the most commonly used definition of a recession is two or more consecutive quarters of negative growth.

In the UK, inflation hit a 40-year high in May as the consumer price index (CPI) rose to 9.1% year-on-year. Although CPI was not around in the early 1980s, the Office for National Statistics suggested that inflation would last have been higher around 1982, “where estimates range from nearly 11% in January down to approximately 6.5% in December.” Things are also expected to get worse before they get better with the Bank of England predicting that CPI will hit 11% later in the year, when the energy price cap is lifted.

UK inflation has not been this high for decades 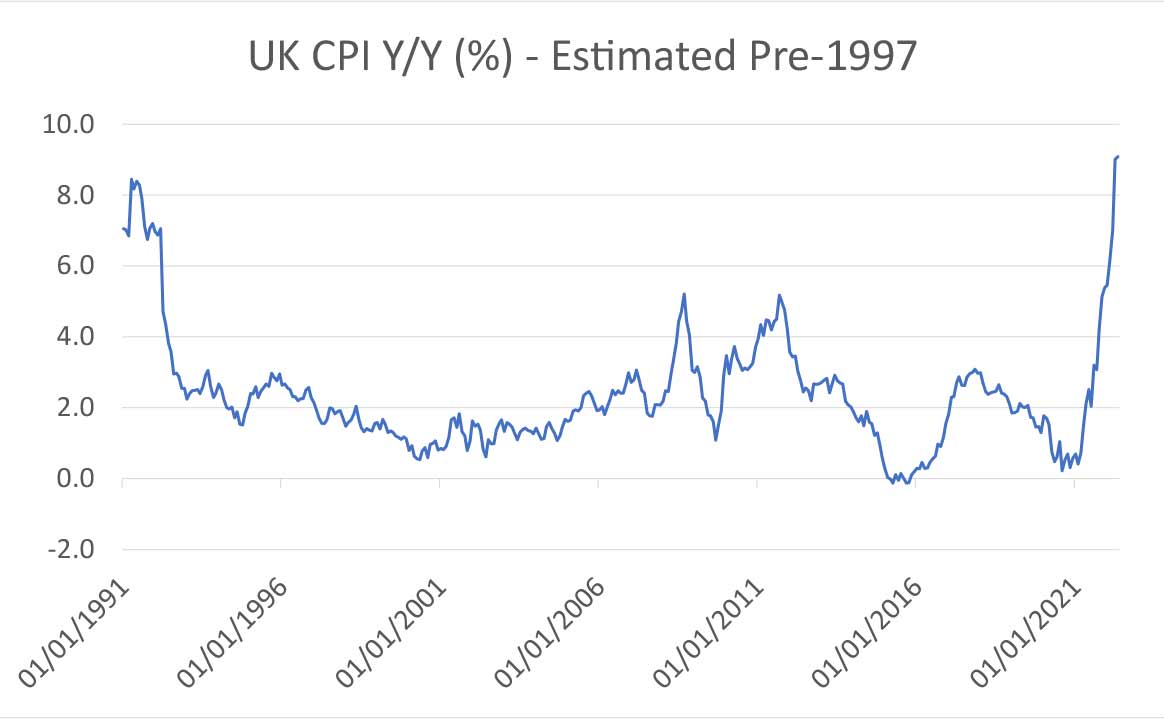 The war in Ukraine has played a role in rising inflation, exacerbating already rising energy and food prices, but it is far from the only contributing factor. A quicker than expected recovery from the adverse economic impacts of the Covid-19 pandemic has also played a significant role. The extraordinary fiscal and monetary stimulus measures were predicated on a longer period of demand disruption than occurred, which in combination with ongoing supply chain issues, have pushed up prices. A simplistic, and not wholly inaccurate, definition of inflation, is too much money chasing too few goods. Currency movements have also contributed to rising prices, with the pound losing around 11% of its value against the US dollar over the past year, although it is broadly unchanged versus the euro.

In response to this, the Bank of England has delivered a 25bp increase at each of its four monetary policy meetings so far this year. The main bank rate currently sits at a 13-year high of 1.25% and you have to go back even longer to find the last time the bank hiked at four consecutive meetings. Further increases are expected with the derivatives markets putting the end of year base rate around 2.8%.

That said, UK rate-setters seem to be reluctant to follow their US counterparts in ramping up the hiking pace further given concerns surrounding underlying economic weakness. Monthly GDP data has shown negative readings in each of the last two releases, the first back-to-back declines in almost two years when the economy was still in the depths of the hit from the pandemic. Monthly GDP has also come in lower than consensus forecast for three months running.

There have only been three UK recessions since 1990, the most recent occurring in the first half of 2020 due to the Covid-19 pandemic. Given this was entirely caused by a single exogenous shock abruptly wreaking havoc on the economy it offers less clues than the preceding two recessions in how stocks typically perform during these periods.

Looking at the early 1990s recession and the Great Recession which began in 2008, it is perhaps surprising that stock market returns were positive one-, three- and five-years after it began. Some of this can be explained by the fact that for an economy to technically fall into recession it must experience two negative quarters of growth, and therefore the starting point for these performance figures, comes after the economy has declined for half a year. But in both instances, these recessions continued for another three quarters, accounting for the bulk of the next year, when market returns were positive.

One plausible explanation for this positive performance is that financial markets are fairly effective forward-looking discount mechanisms, therefore they often begin pricing in a recession before it has technically begun. They also start pricing in a recovery before it has clearly started. 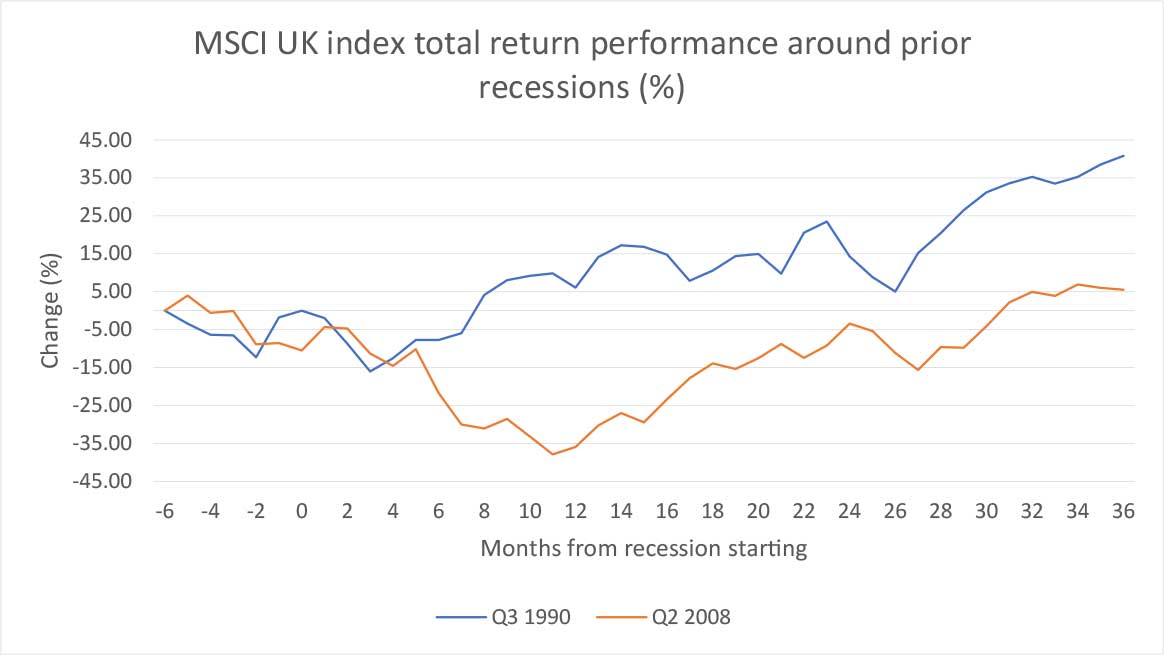 During the early 1990s recession UK large-cap stocks bottomed in October 1990, with negative quarterly growth in Q3 and Q4 confirming a recession. The market then preceded to gain for much of the next three years. The fall in the 2008 recession was more severe, as was the size of the economic shock and hence the labelling of this period as the Great Recession. Negative GDP growth in Q2 and Q3 of 2008 confirmed the economy as in recession and UK shares bottomed in Q1 of 2009. The lowest monthly close came in February 2009, 11 months after the recession began. Again though, by the time this economy was officially confirmed as in a recession it was not too long before the low point for stocks, in this instance five months. In both cases, these recessions lasted 15 months and stocks had begun to recover before the economy was out of recession.

The UK economy grew by 0.8% quarter-on-quarter in the first three months of the year but subsequent data suggests activity has likely declined significantly since. Momentum is clearly slowing and a growing number of economic forecasters are expecting a recession in the coming year. Given this, and using previous recessions as a potential guide, it is perhaps surprising that UK large-cap shares have held up relatively well year-to-date, outperforming their US and European peers.

It should be noted however, that the relative outperformance is more due to specific factors relating to the UK benchmark, rather than a sign of a stronger underlying economy. The benchmark has a greater weighting to energy and mining stocks than its peers, two of the best performing sectors year-to-date due to soaring commodity prices. There is also a greater value style tilt compared to counterparts, with US benchmarks for instance have significantly greater weighting to growth stocks. Energy shares in the UK benchmark fall under the value definition and these stocks also have another characteristic which has contributed to its relative outperformance, they generate the bulk of their revenues in non-sterling terms. This means a weaker domestic currency boosts earnings in sterling terms and, as mentioned above, the pound has experienced a double-digit depreciation versus the US dollar over the past year.

Looking more closely at the UK benchmark’s outperformance it can be clearly seen that this is largely due to the weighting of component companies, rather than a broad market strength. As was the case in the US when the FAANG stocks accounted for a sizable proportion of the overall benchmark returns, we are now seeing a similar theme in the UK. To demonstrate this, if we compare the UK MSCI benchmark with an equal-weighted equivalent, the former is holding up far better.

In summary, the highest level of inflation in over a generation has forced central banks to take fairly drastic measures in an attempt rein it in. Although the hiking cycles of the UK and US have been aggressive thus far, they are expected to remain at a similar rate in the second half of the year. This poses a major problem for economic growth, which is already showing clear signs of weakening, and calls for a recession are becoming increasingly vociferous.

However, recessions have not been that negative for UK stocks in past periods - in fact benchmark returns following prior recessions have been positive. Due to their inherent forward-looking nature, financial markets actually have performed worse heading into recessions than during them. Looking at UK benchmarks, they are already exhibiting some weakness that would be expected with a growing risk of a forthcoming recession, but favourable idiosyncratic factors mean the index is outperforming its peers year-to-date.

MPS in Conversation: Opportunities in healthcare and beyond

Alan McIntosh discusses the worst monthly loss for the MSCI All Country World Index since March 2020.