Reflation to Inflation: what does a rise in prices mean for equities?

Economic reflation has been dictating the path for markets since November. Within equities this has meant rotation out of the COVID winners towards the COVID laggards and more economically sensitive stocks. The net effect, markets are up by 9% year-to-date. More recently however, talk of reflation – a welcome development for investors – has transitioned more towards one of inflation. The impact of inflation on the outlook for equities we believe is more nuanced than the simple reflation narrative from the beginning of the year and while we do not see inflation running away we do believe the balance of risk for equities has changed.

Why is inflation heading higher?

Inflation rates have picked up sharply to over 5% in the US and above 2% in Europe, exceeding their targets of 2% and ‘just below 2%’, respectively. A large part of this was predictable; at the start of the pandemic, with demand falling faster than supply, many companies cut their prices significantly. The energy sector was a big part of this story. On top, price rises due to the sudden rise in demand for goods and services and ‘sticky’ global supply has been less easy to predict. Capacity constraints and supply pressures are being evidenced across the economy, including: international shipping, semiconductors, food supply, housing, materials and commodity prices. Central banks anticipate price rises to be relatively confined to sectors most geared to the shutdown/reopening story and for rises to slow over the next six months but whether inflation is likely to persist is a matter of considerable debate. 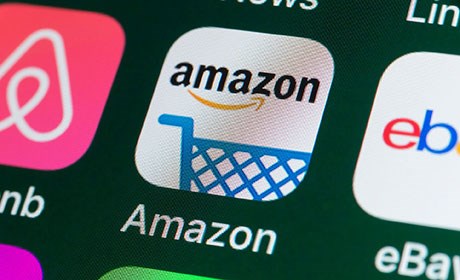 Signs that the current spike in inflation will be followed by resilience, rather than a return to sub-2% inflation will likely be indicated by the labour market. The result of strong demand for workers and reluctant supply due to ongoing wage insurance schemes has been increased wage pressures. The US Federal Reserve expects that labour participation will increase as government support programmes end but persistent wage pressures beyond this would contest the view that considerable slack in the labour market remains.

Some of the disinflationary forces that have been at work to keep inflation low over the last decade such as automation, offshoring of supply and weak labour unions are still at play but equally the policy of austerity that supressed activity and wages has been done away with in favour of a new fiscal policy regime particularly in the US. Undoubtedly, the landscape has shifted from government deleveraging to counteract easy monetary supply to now central banks and governments moving in the same direction. The market hasn’t waited for confirmation either way. The five-year breakeven inflation rate, a measure that shows the markets expectation for inflation, has risen to a post-Great Recession high as investors seek compensation for the near-term risks that inflation is persistent.

What is the impact for Equities?

Equities historically have offered inflation protection. As a ‘real’ asset class company revenues, earnings and dividends rise as higher input costs are passed onto consumers. This is evidenced in the chart below, Figure 1 that shows that company earnings (EPS) have generally matched or exceeded inflation. The analysis of returns and inflation however generally shows a negative relationship. Figure 2 shows that during the 1970s inflation averaged 13% and real returns were negative. Equally during the 2000s, inflation averaged 2.5%, also with negative real returns over the decade. 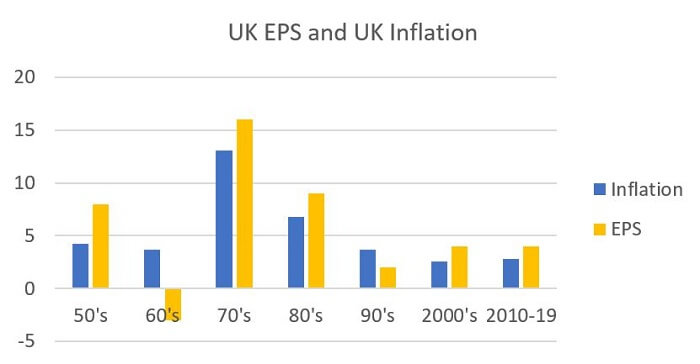 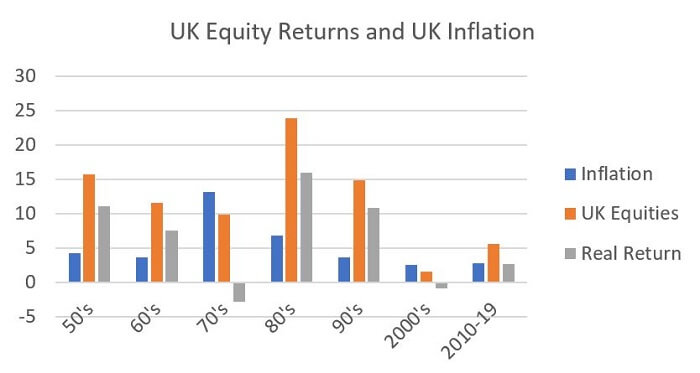 Equities respond to economic growth over inflation but the two are often linked. When inflation is pro-cyclical, it tends to rise when growth accelerates and falls when growth slows. In this environment, equities exhibit a positive relationship to inflation. The 1970s however was characterised by counter-cyclical inflation where rising prices acted as a break on growth resulting in weak GDP growth and higher inflation.

The second point to note is the starting valuation which historically has been a strong predicator for forward returns. The UK market traded on a 12-month forward PE (Price-to-Earnings) of 18x heading into the 70s vs a historical average of 14.5x compared to the starting valuation in 1980 of just 6.5x. Today, the UK market trades on roughly 14x in-line with the historic average while global equities sits at 18x, significantly above the long-term average.

Thirdly, the response to inflation is critical on assessing the impact to equities. While inflation doesn’t generally impact company fundamentals, the monetary response to inflation via higher interest rates lowers valuations. If this happens against a backdrop of stronger growth and rising earnings, equity returns can still be and typically have been positive. Inflation expectations have increased but interest rates remain rock-bottom, a reflection of the fact that central banks anticipate the inflationary upturn to be temporary and a need to keep debt servicing costs low. This means that real rates are low and are supportive of higher equity valuations but equity multiples at current levels – particularly in certain sectors – leaves stocks more vulnerable to a greater impact from the de-rating factor than say the environment was heading into the 1980s. What is true for the market as a whole, however, may not necessarily be true for each sector. More cyclical sectors and those that benefit from higher yields tend to do better. Over recent months we have been adding to sectors such as Financials and Industrials while reducing Technology and Consumer Discretionary whose valuations are more exposed to changes in yields.

On balance, we still think the current environment is favourable to equities primarily because inflation is being driven by strong demand rather than an environment of negative growth and higher input costs. On this basis, equities have historically provided a good hedge against higher prices. A key concern today is the potential response to inflation. We expect the Fed to announce tapering at some point this summer and to start reducing the pace of purchases in December but the response so far has been to signal that they expect inflation to remain at or below its target of 2%. Delaying a tapering in liquidity risks making the eventual market response when they inevitably reduce support, potentially more violent than would otherwise be the case.

For now, policy remains favourable with negative real rate supportive of equities, but we will continue to watch for signs that central banks will respond by reducing support.

As markets respond to an increase in Covid-19 cases over the past couple of weeks, host Jack Bishop, Investment Manager, to discussed how markets have responded to this news, and whether it looks like a new lockdown is on the cards.

With all the attention on the home nations in recent weeks, we take a look at the UK Equity sector, including whether the assets are ‘coming home’?