Trussonomics – what does it mean for markets?

Liz Truss has proposed an ambitious, bold and slightly controversial set of policies to prop up the ailing UK economy, but how will financial markets react? Although the new PM is only recently in the role it looked highly likely that she would win the leadership contest for some time, and therefore a discernible impact in the markets has already occurred.

In the last couple of months, the promise of unfunded tax cuts and a shake-up of the city’s regulatory structure has weighed on UK government bonds, with gilt yields rising sharply higher. The pound has also been under pressure, falling to its lowest level against the US dollar in decades and it is readily apparent that some investors are approaching UK assets with a sense of trepidation.

However, there are also some potentially promising signs, such as the swift action in moving to announce a £150bn energy support plan to shield households and businesses from rapidly rising bills. This is a welcome development in the short-term for combating the highest level of inflation inflation in a generation and gives the Bank of England some leeway in setting monetary policy – they are now not as tied to aggressive interest rate hikes that would slow an already stuttering economy.

While it is yet to be seen whether Truss follows through with all her campaign pledges, there is a sense that her policies have the potential to have a major impact on UK stock, bond and currency markets.

Join our webinar to hear invaluable insight from our expert panellists. 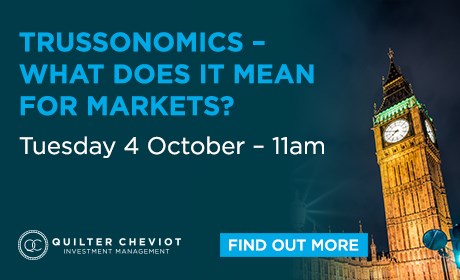 MPS in Conversation: Searching for safety in turbulent times

Simon Doherty and Antony Webb are joined by Jamie Maddock to discuss the MPS strategies’ exposure to the energy and materials sectors.

MPS in the Loop: Responsible investment in practice