Liz Truss’s decision to prioritise a £150bn package as her first meaningful act as UK prime minister reflects the severity of the energy crisis looming over Europe heading into the winter months.

Russia launched its invasion of Ukraine, the spectre of Moscow weaponizing its energy supplies to Europe in retaliation to western sanctions has been widely discussed, and the recent indefinite suspension of the Nord Stream 1 pipeline is the clearest sign yet that this is becoming an actuality. 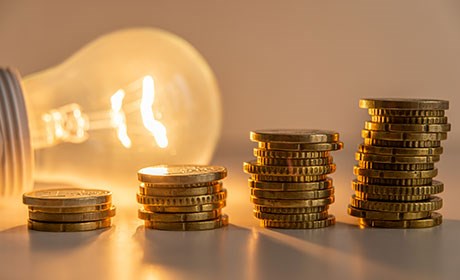 While the current high gas prices are widely attributed to the war in Ukraine, the conflict has exacerbated, rather than instigated, the massive rally. As has been the case with many other markets the origins lie in the Covid-19 pandemic, the effects of which created a combination of tight physical supply that was met with a faster than expected recovery on the demand side. This can be seen by the significant rise in the price of gas in the year up to 23rd February 2022, the day before Russia launched its invasion. During this 12-month period the price of TTF, a European gas benchmark, increased more than fivefold, surging from €15.9/megawatt hour (MWh) to €89.2/MWh.

Following the escalation in the conflict, the threat of supply disruptions from western sanctions and Russian retaliatory measures provided the spark to ignite a rip-roaring rally in already tight gas markets. Just over six months later, Vladimir Putin’s decision to shut down the Nord Stream 1 pipeline marked a further escalation sending gas and power prices to new record highs, as TTF hit €343/MWh. It has been a similar, albeit less dramatic, story for the oil price, although the price of international benchmark Brent Crude did recently move back below the level it traded before Russia’s invasion. 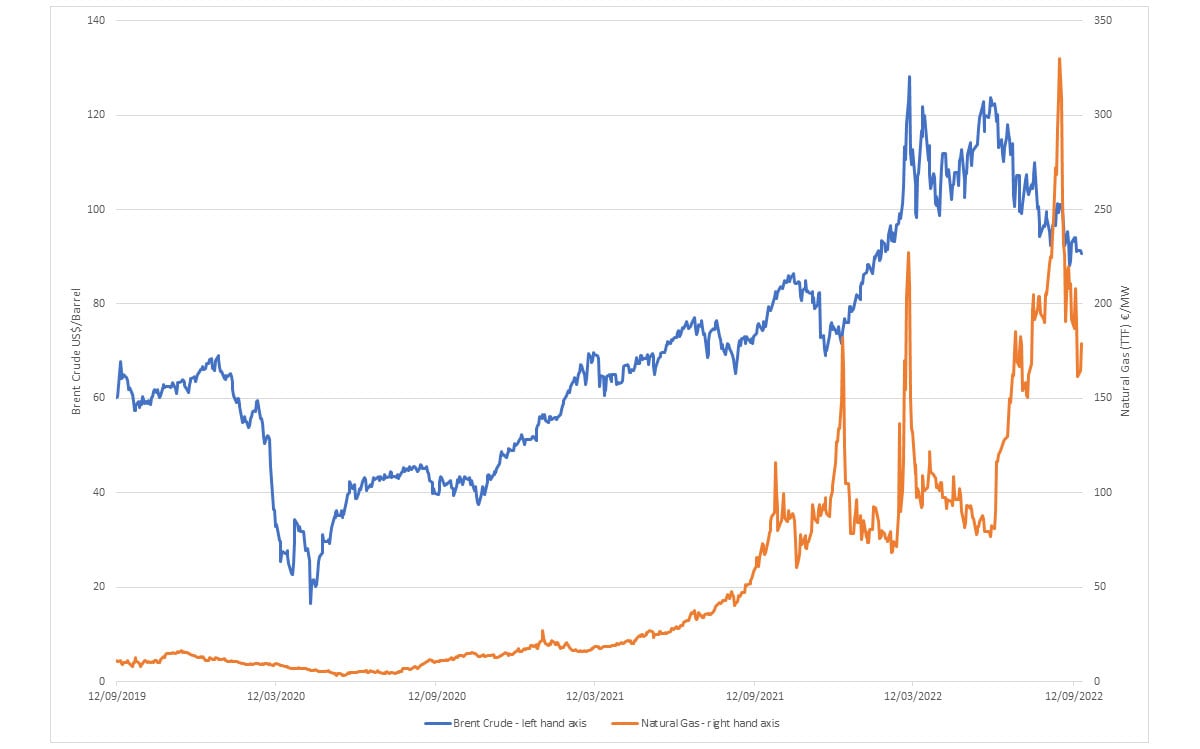 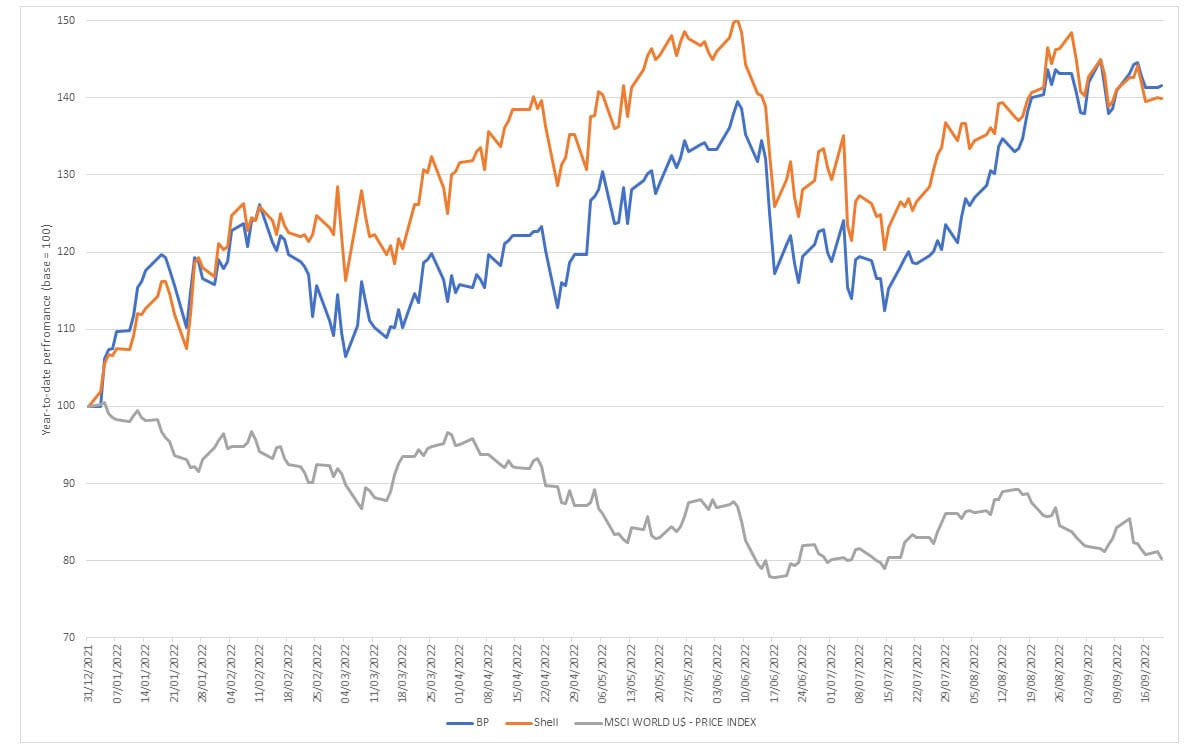 Dmitry Peskov, a Putin spokesman, blamed European Union (EU), United Kingdom and Canadian sanctions for the closing of the Nord Stream 1 pipeline. The comments came a matter of days after the pipeline was shut off due to a “technical fault”, which the Kremlin blamed on difficulties repairing German-made turbines in Canada, due to sanctions.

UK gas prices have also moved sharply higher in recent months despite less reliance on Russian imports, with around 50% of UK annual gas consumption coming from domestic production in the North Sea. The large rise in prices has created a real problem for UK households and businesses, as gas is used not only for heating purposes but also for a significant proportion of electricity generation, somewhere in the region of 40%.

Costs capped, but at what cost?

Just days into her tenure, Truss announced an estimated £150bn package to shield Britain from surging energy prices. The state intervention is skewed in favour of households with a price cap of £2,500 for the next two years on bills that were scheduled to rise to over £3,500 next month and, according to some forecasts, to top £6,000 next year. This cap is not hard a ceiling as households may end up paying more than this if they use more electricity. It is in fact a cap on the price of electricity at a certain level per kilowatt hour, with the quoted cap stating what bills for the average household will be.

For businesses and public sector bodies, such as schools, wholesale energy prices are now expected to be £211/MWh for electricity and £75/MWh for gas, according to government statements. These levels are less than half that anticipated this winter without the scheme, though the support will only last for six months. As well as the fiscal support, Truss has promised to increase domestic oil and gas production and restart shale gas fracking as part of a larger reform for the UK energy market.

Although the handout is seen as a welcome development by many it does raise a clear moral hazard situation, in that there is now little incentive to reduce usage despite soaring costs. Internal governmental estimates have put the cost of this intervention at £150bn, £90bn of which is earmarked for households, but if gas prices are higher than forecast over the time horizon the taxpayer is left exposed to an even larger bill.

The move will bring some near-term relief to the Bank of England as it is expected to exert immediate downside pressure on inflation metrics, allowing the central bank some flexibility to pursue a less hawkish monetary policy path at a time when economic activity is stuttering. However, the longer-term ramifications are seen as potentially less favourable and could lead to higher levels of future inflation, coupled with lower growth, as taxpayers will be burdened with the debt for a considerable amount of time. Critics brand the policy as an example of kicking the can down the road.

Given the number of users involved, seemingly small reductions in domestic power usage can make a significant impact. Setting thermostats in the region of 3C lower would cut around 10% of power usage. In the longer run reducing energy usage could have positive implications for inflation as current price-cap measures can be viewed as effectively protecting discretionary spending on other items, providing upwards pressure on inflation.

The most recent UK Consumer Price Index (CPI) data for August showed a rise of 9.9% year-on-year, a slight drop on the previous 10.1% reading that was the highest level since 1982 – interestingly the main reason for the decline was the recent fall in petrol and diesel prices, a direct result of a lower oil price. Prior to Truss’s leadership victory investment banks were forecasting that CPI could exceed 20% early next year, but proponents of the energy package believe it could knock as much as 5% off inflation.

In 2021, the European Union imported 40% of its total gas supply from Russia, around 155bn cubic metres. That figure has subsequently fallen to approximately 9% since the indefinite closure of Nord Stream 1 pipeline, according to the European Commission. The shortfall has been exacerbated due to drought conditions over the summer months which have significantly reduced French nuclear power output and caused a drop in hydropower generation.

Unlike in the UK the response in Brussels includes a windfall levy that will, according to internal projections, raise in excess of €140bn to soften the blow to the bloc’s finances. The European Commission has also outlined three drivers that it believes will help lower prices by reducing demand.

There will also be a temporary revenue cap on “inframarginal” electricity producers. These are firms with lower production costs, such as renewables, nuclear and coal/lignite, that have been largely shielded from the increase in operating expenses associated with higher gas prices which are benefitting from the large increase in wholesale electricity prices they receive. The commission has branded these firms as making “exceptional revenues” and proposed a revenue cap of €180/MWh - a level it believes “will allow producers to cover their investment and operating costs without impairing investments in new capacities.”

The third proposal is a temporary solidarity contribution from excess profits generated by oil companies. It would be collected on 2022 profits which are above a 20% increase on the average profits of the previous three years.

Windfall taxes can be a contentious area, but the price cap is set at a level developers believe still allows for good profits, while also supporting investments. To put the €180/MWh cap in context, two years ago most of these developers had significantly lower prices in their models, so it still represents a sizable increase.

Producers of low-carbon energy, such as nuclear, solar and wind power have benefitted from the soaring wholesale electricity prices, but largely sidestepped the associated higher input costs that have fallen on their fossil-fuel dependent competitors. However, although power prices have risen exponentially, that does not necessarily translate to exponential increases in revenue. Several producers will have already hedged large amounts of their production to “lock-in” future prices at levels well below the current market price. In some instances, producers have been known to hedge more than 90% of output.

In general, the energy crisis has accelerated the need for renewables as it has clearly revealed the level of reliance on Russian imports and the need to increase energy security. The rapid rise in power prices so far in 2022 has clearly demonstrated issues on this front and we believe that renewables offer the most attractive opportunity to reduce this reliance.

This view aligns with our continued preference for stocks within utilities sector that are well placed to be beneficiaries of the energy transition, such as EDP Renovaveis (EDPR), a leading global renewable energy producer. EDPR operate offshore, onshore and solar wind farms across the globe and stands to be benefit from the transition as the renewable rollout is accelerated and demand for their assets remain high.

Chart 3: EDPR has held up well compared to the broader market this year and is, in our view, favourably positioned to benefit from the energy transition 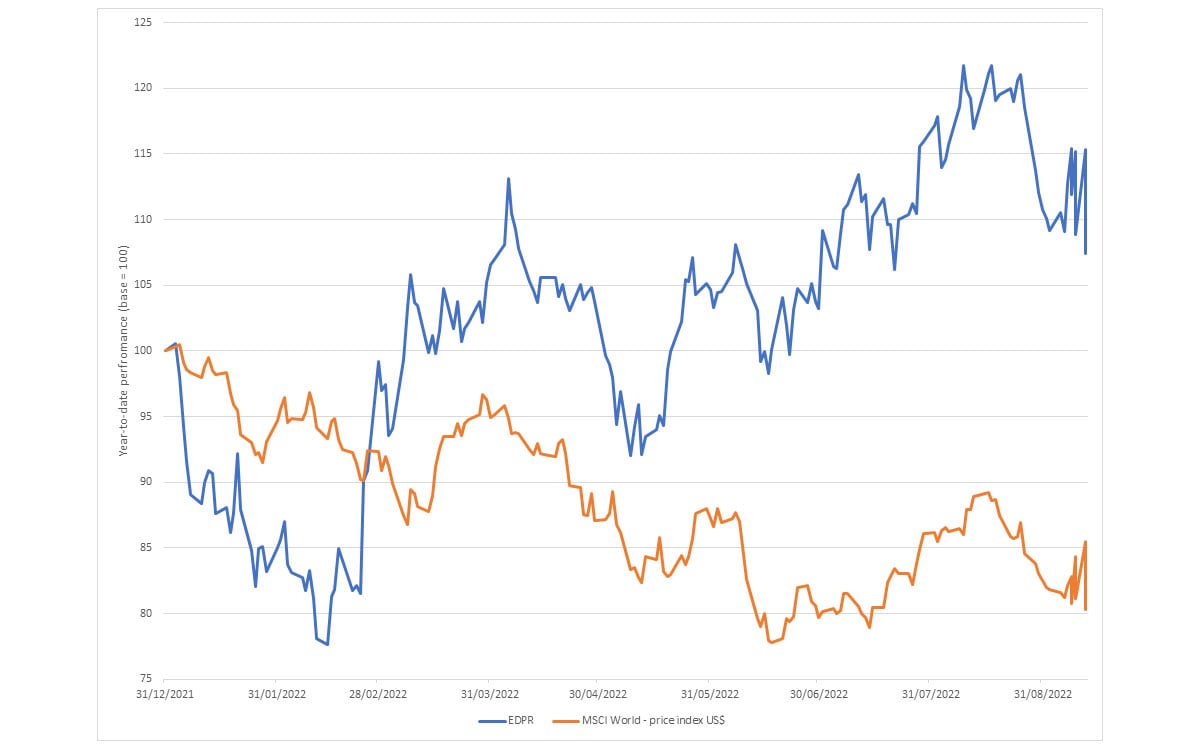 Jamie is the global energy and materials equity research sector specialist. He analyses companies, industries and, with a deep knowledge of key sector trends, generates investment ideas that deliver above-average returns. In addition, he incorporates an in-depth fundamental understanding of macro-economic drivers and commodity supply/demand balances to inform these investment ideas.

Tom is a global equity analyst covering Commercial and Professional Services, Transport and Utilities. Tom joined Quilter Cheviot in 2022 having previously worked at Redwheel as an equity analyst on the UK, European and Global teams.