Technology stocks have borne the brunt of some of the strongest selling in the market year-to-date, but second quarter results have been pretty solid on the whole, with a string of earnings updates displaying a pleasing level of resilience.

While the change in the macro environment is an important factor for these stocks, and has no doubt had an impact on market sentiment, it should not be seen as the sole consideration for investors. 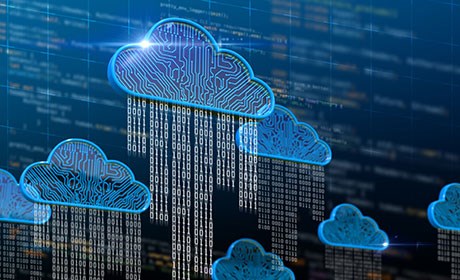 I recently visited Silicon Valley to take a closer look at how these firms are coping with the new business landscape, with a particular focus on how demand is holding up in the face of well-known macro headwinds. There are some signs of weakness but also several reasons for optimism remain, with spending on cloud computing robust and we continue to like software as a reasonably defensive area at the forefront of the digital transformation. Cyber security also exhibits appealing defensive characteristics in the face of a downturn and although IT spending is slowing, it is not crashing.

The reasons behind the market softening are fairly clear. The Federal Reserve has acted swiftly in a bid to curb the highest level of inflation in a generation, delivering 75 basis points interest rate increases at its last two policy meetings – the first hikes of this magnitude since 1994. The target range for the federal funds rate is now 2.25%-2.50%, up sharply from <0.25% at the start of the year.

This has weighed broadly on stock markets but felt especially keenly among tech companies that generally trade on higher forward earnings multiples, meaning that investors are willing to pay a higher price for earnings that are expected to occur further into the future. Rising interest rates diminish the attractiveness of these earnings and therefore higher interest rates are, ceteris paribus, seen as a negative for the sector. The current situation is a role reversal of much of the previous 18 months, during which time low interest rates and unprecedented amounts of quantitative easing (QE) contributed to tech stocks outperforming their peers. 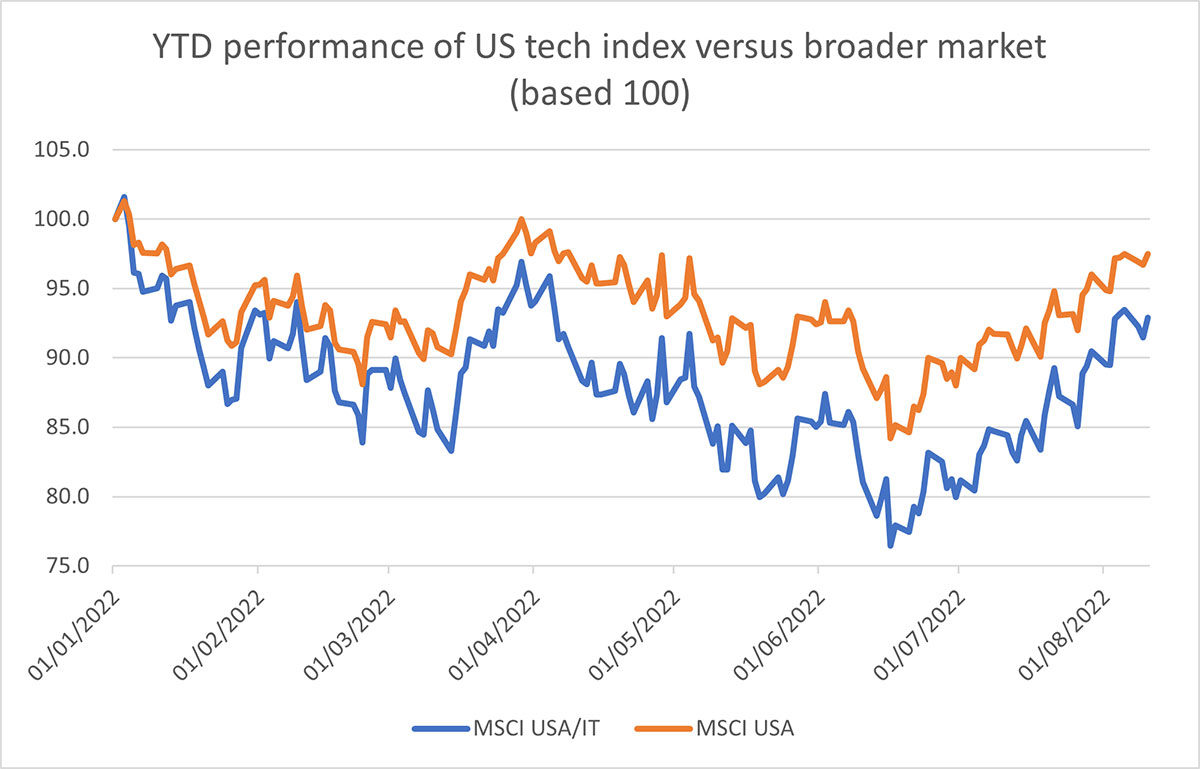 That said, a US tech index (MSCI USA/Information Technology (GBP total return)) has bounced strongly from its June lows and, after being down almost 25% for the year, now trades less than 10% lower. Part of this recovery has been aided by a pullback in rising bond yields but there has also been a clear impact from second quarter earnings releases, which overall have been impressive. Microsoft and Intel are two obvious examples of this increased sensitivity to a company’s operating performance. Since announcing an impressive update in late July Microsoft shares have enjoyed a sizable rally, whereas Intel’s results shortly after sent the stock to new lows for 2022. 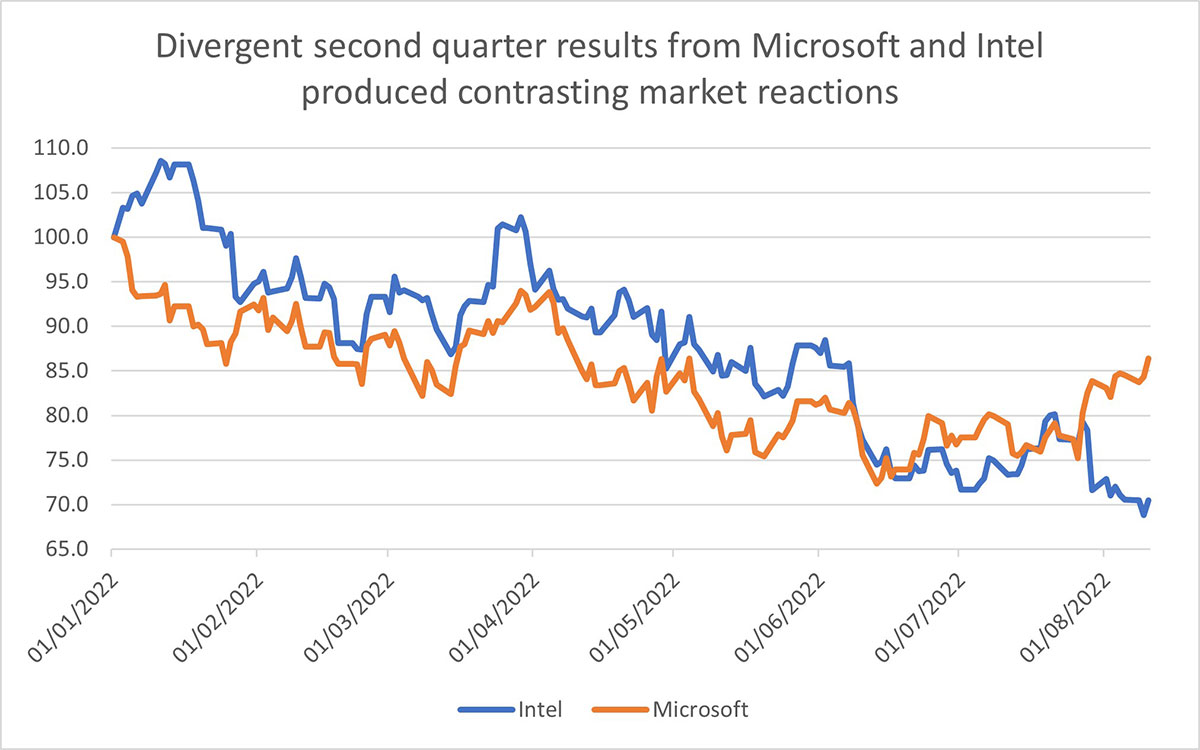 The performance of these stocks in recent weeks reveals the value in considering demand characteristics and not simply just applying a broad-brush approach to the tech sector, dominated by macro paranoia. In our view, Microsoft represents a quality company at a reasonable price, an opinion underlined by the latest earnings update. All three of the firm’s divisions had another impressive quarter and we particularly like intelligent cloud, which grew revenues by 25%.

This shows demand for cloud services remains strong and we continue to see a long runway of growth, although a 3% deceleration, driven by lower consumption, does reveal that this area is not immune to slowing economic activity. Microsoft currently occupies second position in cloud market share, behind Amazon Web Services but ahead of third-placed Google. Rising energy costs pose a potential risk, but we are yet to see any clear adverse impact from this feeding through.

PC demand appears to be softening as the big boost during the pandemic, caused by the initial shift to remote working as well as home schooling, has waned. Intel reported a 17% second quarter drop in revenue, with PC revenue down 25%. Despite the appointment of new CEO, Patrick Gelsinger, we think that Intel is now behind AMD and will struggle to catch up. In our opinion, AMD leads in technology, has new products in PC which are gaining market share from Intel and new Graphics Processing Unit (GPU) products, benefiting from Artificial Intelligence (AI) adoption.

While we believe there is a danger of over-emphasising the macro impact on the tech sector, the market environment should clearly be taken into account. In light of this, we believe software is an attractive play, exhibiting reasonably defensive characteristics as it remains at the forefront of the digital transformation. Many companies in the space, such as Asana, CRM and Bill.com have not seen any slowdown yet, although deals are taking longer to close – especially for companies with short sales cycles, like Cloudflare and Workday.

From an investment perspective there is a certain degree of inflation protection, as the majority of firms have increased prices by around 5% and demand appears largely unaffected. The Russian invasion of Ukraine and accompanying cyber-attacks highlighted the importance of cyber security and raised its priority for companies. A survey of Chief Technology Officers (CTO) showed security software is one of their top three priorities, behind cloud and digital transformation. Furthermore, security software is the area of IT spending least likely to get cut, according to respondents.

Although the US economy is now in a technical recession the labour market remains in rude health, with the unemployment rate of 3.5% matching its lowest level in half a century. The tech sector is reflective of the broader labour market in that it remains tight, albeit with some potential early signs of softening. While younger companies see this as an opportunity to recruit, new hire openings are falling and there appears to be a hiring pause for some. There have been some layoffs but not largescale and the majority of those have found themselves back in work in a relatively short time.

The market dynamic has been affected by inflation with new hires seeing wage inflation of 10%-20% and the decline in share prices since the start of the year means that stock-based compensation is down (or even underwater). Hybrid working has become the norm, and most are moving to less than two days in the office per week. During my visit last month, restaurants and hotels in San Francisco were notably quiet – the main activity downtown came from autonomous taxis from Waymo and GM Cruise.

In conclusion, tech firms have endured a challenging year thus far with tech indices falling peak-to-trough by around 25%, although there has been a decent recovery in the last couple of months. The speed of the decline has led to some drawing comparisons to the bursting of the dotcom bubble in early 2000s, but in our opinion the situation is quite different. The revenues and profits generated at present dwarf those from the dotcom bubble, while market valuations are far less lofty.

In general, most of the declines have come in the form of derating, with earnings standing firm but investors willing to pay a lower multiple for them. This derating may well not be over and poses a challenge akin to threading a needle for tech firms. If they provide strong guidance, then the market may be concerned that they have not seen an impending slowdown, but if they guide down, then the stock price gets punished.

This catch-22 has no easy solution and we have seen different approaches to it, with Salesforce not changing their guidance methodology whereas Nvidia have warned on the macro environment. We see this as part of the de-risking process and note that there have still not been major sell side downgrades. We remain positive in the long-term on the sector and currently have a strong preference for companies exposed to cloud computing and software versus more cyclical sectors, like advertising and semiconductors.

Ben is an Executive Director in Quilter Cheviot’s global equity research team. Currently he researches Global Technology, Media and Telecoms, but he also has extensive experience and knowledge of Global Healthcare stocks. He utilises his deep industry knowledge to identify attractive investment opportunities before they are widely understood by the market.