2020 – the year of the Tiger King, but also the year of shapes. Talking heads on financial channels would line up to debate how the recovery for the economy, and for the stock market, would look. Would we get a V-shaped recovery, a U-shaped recovery or a K-shaped recovery? The list was seemingly, and tediously, endless.

This year we are being treated to a similar debate about the ‘flations. What happens to inflation is (at the moment) the primary issue for stock markets as we move through the second half of the year. The mooted potential outcomes are below as a reminder:

For what it is worth, I sit more in the camp that we are going to begin to get inflation under control during the second half of this year, and that prices will start to fall as we move into 2023.  We are living through a very strange economic period; a real-time experiment of what happens when you shut off the global economy for a year and then let consumers, feeling relatively flush with cash, back out into the wild again. This summer, we are seeing what my colleague coined revenge spending – “we have not been on a proper holiday in three years, so let’s have two this summer”.  You can see this attitude showing up in credit card spending, which is up pretty materially year to date, but that is a conversation for another day.  The point is that I think we are seeing a lot of pent-up demand which will eventually pass through the system – like a snake eating a football.

Ultimately capitalism will always try to find a balance between supply and demand, and supply chains are beginning to rectify themselves. Housing, water and fuels have been large contributors to the rapidly rising inflation that we have seen during the first half of the year (per the below chart) – if you have filled your car over the past few weeks, you will have noticed that prices are starting to come down.  We saw some softer data in the US last week too, which would corroborate the conclusion that we are getting a handle on inflation. 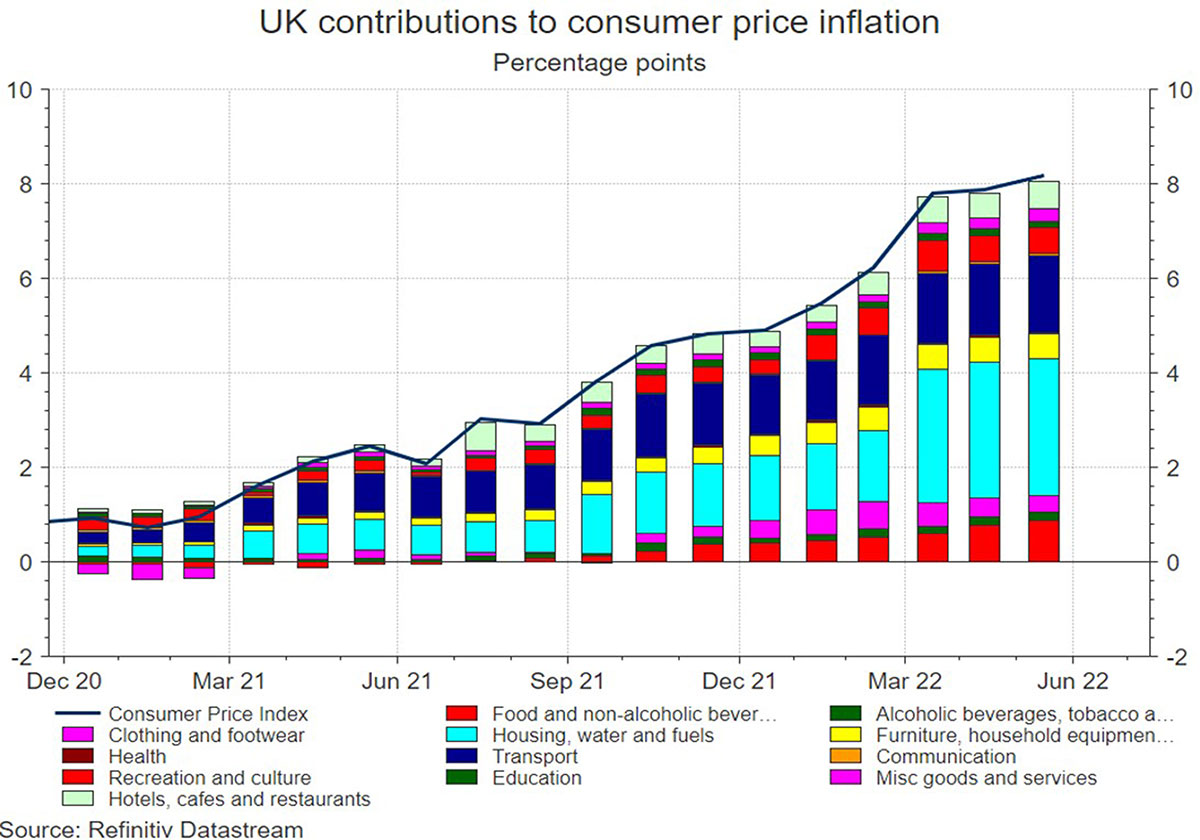 There are, as ever of course, a few fairly major caveats and counter-arguments:

There are others of course, we could be here for days arguing the toss on this issue.  But for our purposes let’s focus on the impact for markets.  My colleague Billy Ewins and I looked at the performance of stock markets going back to 1970 and split it up into periods where inflation was rising, and where it was falling.  The numbers are below:

There is a lot going in the table above, so here are my main takeaways:

I have a number of clients who were around during the 1970s and remember a painful period financially. Just look at the huge changes in inflation from the table above for that decade and imagine trying to run a business in that environment.  Although there are undoubted echoes of the 1970s today (strikes, falling real wages, stark societal inequality, political turmoil, heatwaves!), I would suggest that the world is a different enough place to justify not using the 70s as too relevant an analogue. Technological advancement is fundamentally deflationary and has led to massive gains in the productivity of the average worker over the past fifty years. Trade unions have less influence today (rightly or wrongly).  The world is a far more inter-connected place than it was back in the 1970s, and although this may mean revert a little in the short term, we are not going back to where we were then.  Due to medical advances, we have an older society today as well – older folks typically spend less than those in the workforce (reducing demand) and rely on income generating assets to fund their cost of living (which pushes down interest rates).

My long held view (and apologies to my clients for banging the drum on this again) is that even if inflation settles down above the 2% target the UK and the US central banks have set, they have very little incentive to raise interest rates punitively – firstly, because it makes sense to keep borrowing costs on our current debt pile low, and secondly, because higher than target inflation will act to reduce the real cost of society’s debt.

However even if I am wrong, and we have entered into a new paradigm of high inflation and sluggish economic growth (the stagflationary environment I summarised above which defined the 1970s) – history would suggest that those who choose to invest in real assets (stocks, property and commodities) are best placed to try and keep pace with inflation.  You might not quite entirely keep up, but you will keep a good chunk more of your purchasing power than you would have if you parked the money under the mattress. 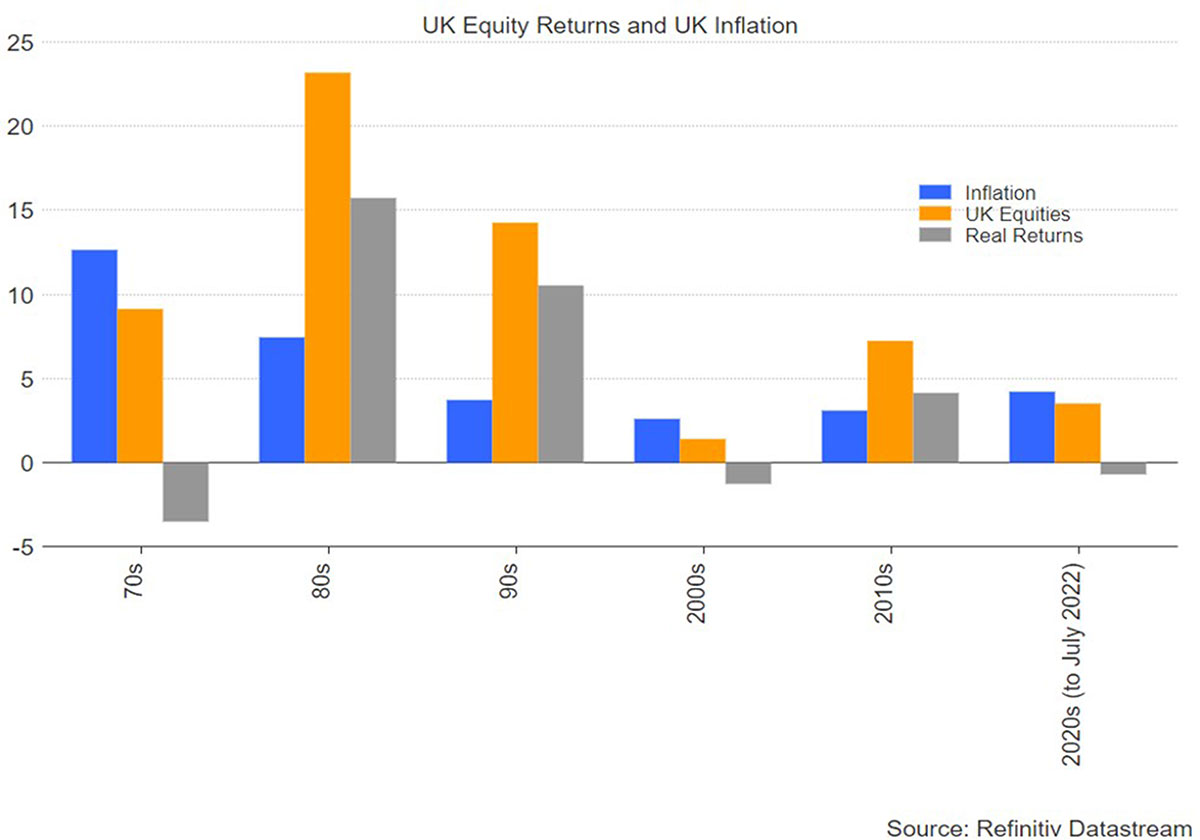 Have a great week.  If you are looking for a reading recommendation for holiday, while I was away, I read “Amazon Unbound” by Brad Stone which covers the development of Amazon from 2010 to the present day. Incredibly detailed, and a fascinating insight into a business which has arguably become integral to modern life.

The MSCI information may only be used for your internal use, may not be reproduced or redisseminated in any form and may not be used as a basis for or a component of any financial instruments or products or indices. None of the MSCI information is intended to constitute investment advice or a recommendation to make (or refrain from making) any kind of investment decision and may not be relied on as such. Historical data and analysis should not be taken as an indication or guarantee of any future performance analysis, forecast or prediction. The MSCI information is provided on an “as is” basis and the user of this information assumes the entire risk of any use made of this information. MSCI, each of its affiliates and each other person involved in or related to compiling, computing or creating any MSCI information (collectively, the “MSCI Parties”) expressly disclaims all warranties (including, without limitation, any warranties of originality, accuracy, completeness, timeliness, non-infringement, merchantability and fitness for a particular purpose) with respect to this information. Without limiting any of the foregoing, in no event shall any MSCI Party have any liability for any direct, indirect, special, incidental, punitive, consequential (including, without limitation, lost profits) or any other damages. (www.msci.com)

Taking Stock - How I Invest

The title says it all, really.

The oil price has been falling, but oil stocks are holding up. Why?