We revisited this popular topic from our last webinar series. Carly Moorhouse, Fund Research Analyst and Sanjay Patel, Equity Research Analyst, discussed the ‘Made in China in 2025’ plan, supply chain diversification into India and Vietnam, as well as investment into factory automation & robotics.

Find out why this sector is so important and what new investment opportunities these growing subjects are going to create. 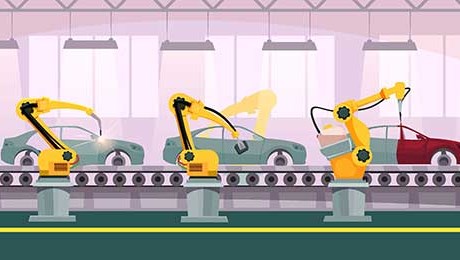 What do Evergrande’s woes mean for the Chinese economy?

Last month news broke that China’s second largest property developer, Evergrande, had entered a debt crisis and was at risk of collapse. The news prompted a slew of frightening headlines that branded the failure to pay its bond interest payment “China’s Lehman Brothers moment”.

Evergrande is a sprawling company with its fingers in many pies, and the seemingly shocking news prompted panic from many investors, who feared the potential collapse of such an enormous corporate could send shockwaves around markets worldwide, or even cause a financial crash. As we explained on a recent webcast, for others – including Chinese domestic investors – the news did not come as a complete surprise.

For years, Chinese real estate companies were allowed to borrow money with few restrictions, in order to fund rapid growth in the domestic economy. As a result, much of the Chinese real estate investment sector has been fuelled by debt. In Evergrande’s case, when the day came that the company had to service its liabilities, it couldn’t pay, leaving the company with a staggering $300bn bill. Then, in the weeks that followed the news about Evergrande, mid-sized Chinese property developer Fantasia Holdings failed to meet a $206m bond payment, prompting a formal default.

The failure of a behemoth like Evergrande has already impacted surrounding sectors including property management, banks, and insurers. Fortunately for us at Quilter Cheviot, none of our equity funds are exposed to Evergrande, as the Chinese real estate sector is not known for being high-quality due to its risk from heavy indebtedness. Therefore, it is not an area we have historically wanted exposure to. We have a very limited exposure to some impacted sectors, like the Hong Kong property market for example, but remain unconcerned about the strength of the companies that our funds have exposure to, as well as the liquidity in that area.

One interesting point amidst the Evergrande saga is that domestic investors seem to be less concerned about the possible collapse of the property titan than international investors. China A-shares – essentially China’s domestic market – were relatively stable when the situation hit the headlines, despite the market being made up of around 80% retail investors. We believe the domestic market reacted to the situation with relative calm because the level of debt in the real estate market was well known, and Evergrande’s bonds have been signalling an increasingly distressed situation for some time now.

What’s next for China?

The Evergrande saga will not have helped an already slowing Chinese economy, however there are still pockets of growth to be found.

For one, there is China’s ambitious change in economic strategy that has been unfolding over the past few years. The country has implemented a national strategic plan and industrial policy known as ‘Made in China 2025’ that will see it move away from being a producer of cheap goods like textiles, and instead focus on developing its high-tech manufacturing sector. This will focus on innovation in areas such as pharmaceuticals, medical devices, electric vehicles, and semiconductors.

At the same time, China wants to focus more on domestic consumption and common prosperity, which aims to make sure there is a better distribution of wealth across the country.

China is changing, there’s no doubt about that. But with change comes new opportunities, and in areas where we see the potential for growth, we still believe China is an exciting place to be for investors.

Investors should remember that the value of investments, and the income from them, can go down as well as up and that past performance is no guarantee of future returns. You may not recover what you invest. This document is not intended to constitute financial advice; investments referred to may not be suitable for all recipients. This is a marketing communication and is not independent investment research. Financial Instruments referred to are not subject to a prohibition on dealing ahead of the dissemination of marketing communications. Any reference to any securities or instruments is not a personal recommendation and it should not be regarded as a solicitation or an offer to buy or sell any securities or instruments mentioned in it.

Weekly webinar series: Getting back to the future

We’re back for our final Analyst webinar series of the year, and in light of an uncertain 18 months, we’d like to focus on getting ‘Back to The Future’. Our Analysts will be discussing current key topics as well as looking into the sectors they believe will be impacting your client’s portfolio over the coming years.

Register for an upcoming webinar

Getting back to the future: Inflation vs Deflation

With interest rates rises potentially on the horizon, the question on every investor’s mind is, ‘are we heading towards a period of high growth and inflation, or will a deflationary environment take us back to where we were before?’

Join Simon Doherty, Lead Portfolio Manager of our Managed Portfolio Service (MPS) for an overview of the key drivers of performance in Q4 2021.