UK financial markets have experienced heightened volatility in recent weeks, with the pound falling to its lowest ever level against the US dollar, UK stock benchmarks dropping to their 2022 lows and the government bond market posting some of its largest daily swings on record.

The catalyst for this recent bout of volatility was the new government's fiscal plans, with chancellor Kwasi Kwarteng’s “mini-budget” roiling markets as investors seemingly began to lose confidence in the UK’s credibility. 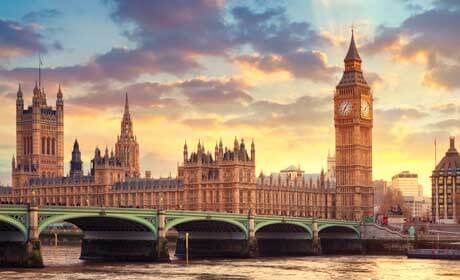 Even after the government performed a dramatic U-turn on the 45% income tax rate, the raft of measures still planned represent the largest combined tax cut in 50 years, around £43bn, or 1.5% of Gross Domestic Product (GDP). The government will need to borrow an additional £70bn to fund this and its estimated £150bn energy crisis package, unveiled just a matter of weeks before. The extra borrowing would be expected to increase costs and push yields higher, but the speed and scale of the move in gilt markets suggests that fiscal credibility is starting to be questioned.

There are some mitigating factors that provide greater context to the market reaction, such as the “mini-budget” came at a time when global markets were looking fragile, with US bond yields and the US dollar both moving higher for much of September. Still the relative moves compared to US and European equivalents suggests that there were clearly UK-specific factors at play.

Chart 1: Sterling recently fell to its lowest ever level against the US dollar below the 1.04 handle before bouncing to around 1.12 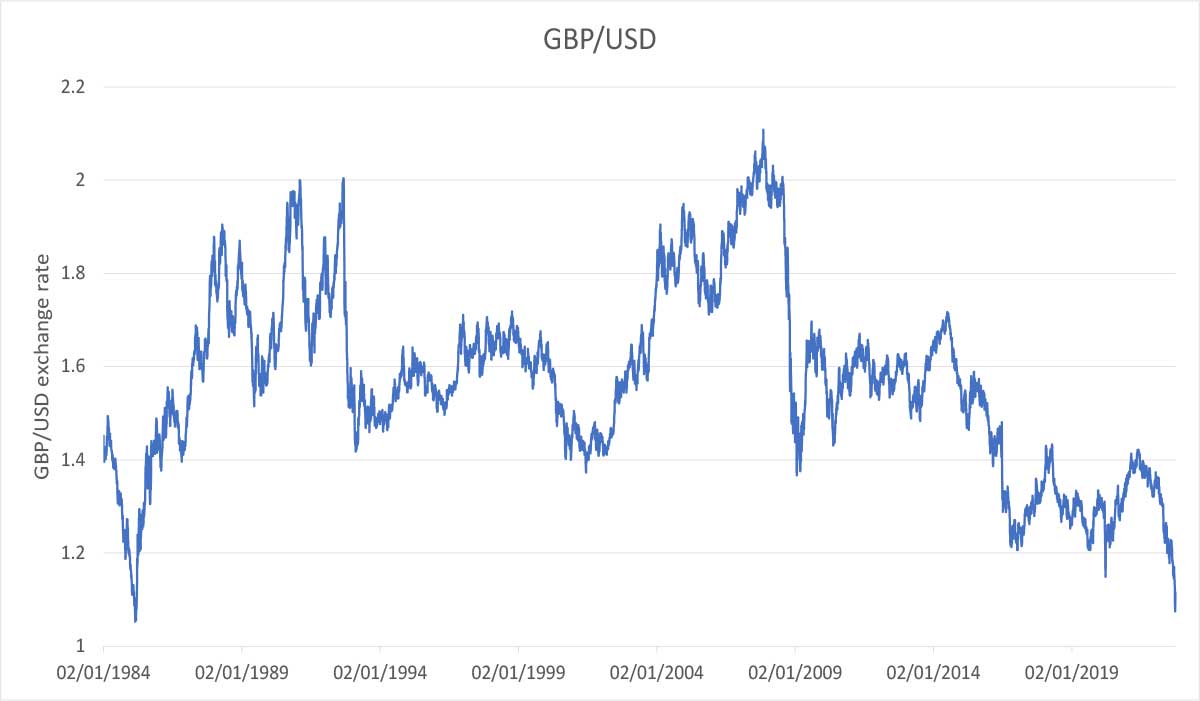 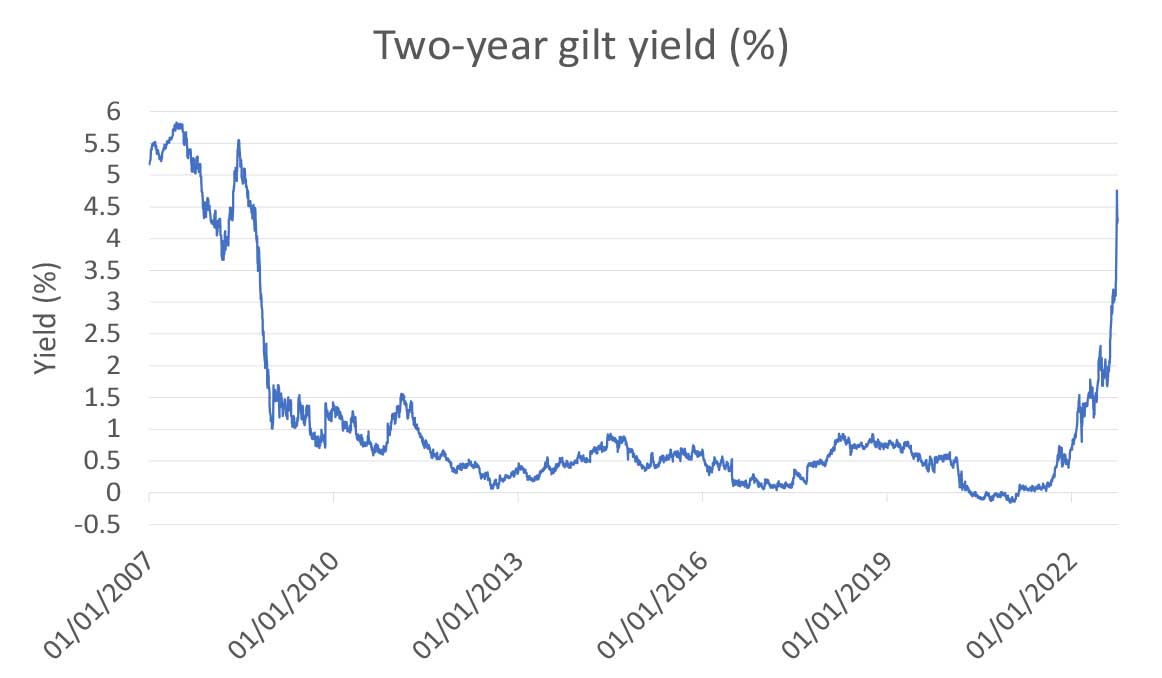 The two-year gilt yield, which is largely a reflection of expected central bank policy in the coming years, has reached its highest level since 2008, as investors bet that the Bank of England (BoE) will have to raise its base rate further and faster, to counteract the additional inflationary pulse forecast from the fiscal stimulus. For the vast majority of the last decade, the two-year gilt yield was below 1% and was in negative territory as recently as January 2021.

As can be seen from the chart above, interest rates have been moving sharply higher for much of the year, with the two-year yielding 0.68% at the start of 2022 and 4.28% at the end of the third quarter, on 30th September, after peaking at 4.75% a few days earlier. This 400+ basis point move higher has come as the BoE began aggressively raising rates to curb the highest level of inflation in a generation.

After starting 2022 at 0.25%, the base rate has been increased at every policy meeting, with the last two increases of 50 basis points the joint-largest moves since 1995. The most recent increase, which took the base rate to 2.25%, came just a couple of days before the “mini-budget”. The terminal rate, the level at which the BoE are seen ending the current hiking cycle, is now around 5.6%, down slightly from an expected peak of 6% but still over 300 basis points above current levels.

Chart 3: The Bank of England has raised its base rate aggressively this year to 2.25%. It is expected to continue increasing until the rate is above 5.5% - shown by the dashed line. 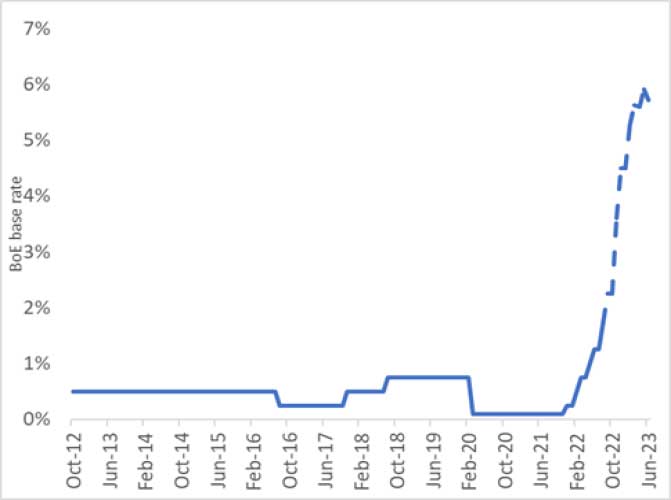 During the market fallout from the “mini-budget” some of the largest moves occurred at the long-end of the gilt market. Compared to the short-end, longer-dated bonds are typically less sensitive to monetary policy changes and more a reflection of longer-term inflation and growth dynamics.

For pension funds a vicious circle was created, whereby selling gilts to meet creditors’ cash demands forced prices even lower. A number of pension funds were reportedly in serious danger of insolvency, particularly those that hedged exposure to defined benefit pension schemes – a process known as liability-driven investment, which can be especially sensitive to large moves in gilt yields.

The BoE stepped in pledging to buy up to £5bn of long-dated bonds a day for the next 13 weekdays, as well as suspending its programme to sell gilts. That day was the largest daily drop in the UK 30-year gilt yield since at least 1992, just a couple of days after the largest increase in yield over the same time period.

Chart 4: The BoE intervention meant that 30-year gilt yields swiftly returned to levels similar to where they were trading before the “mini-budget” 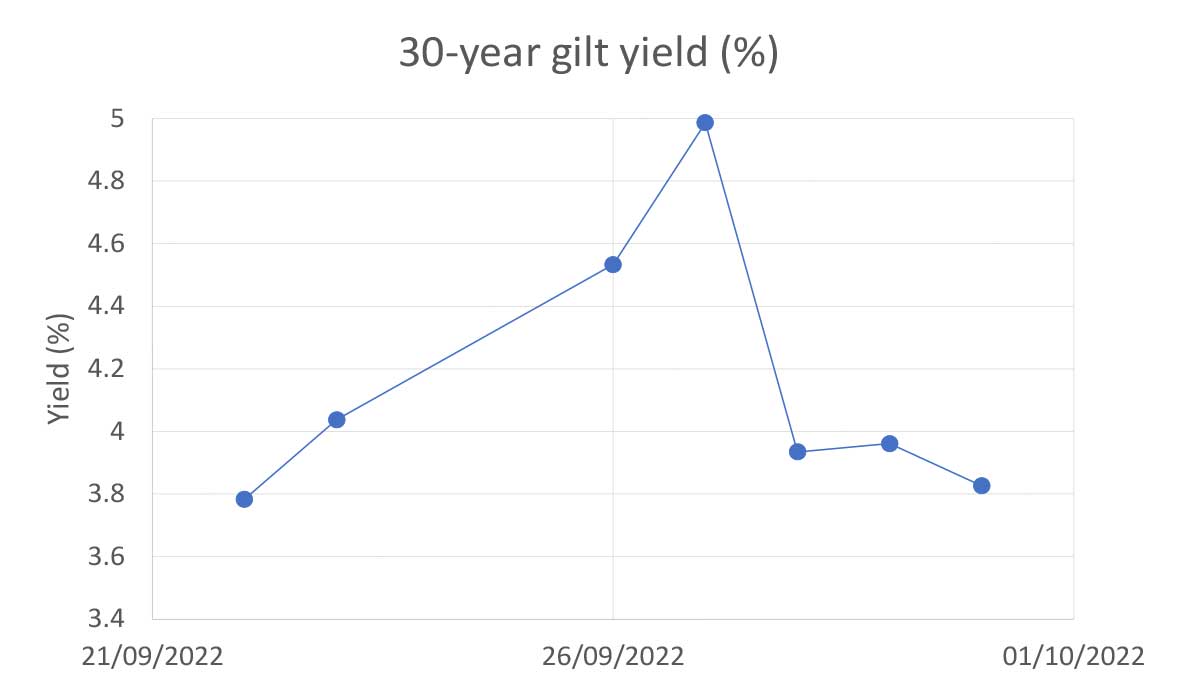 In summary, we think market-based expectations for BOE rate hikes are currently too aggressive, as the economy is likely to slow substantially before the base rates get to 5.75%. It has been a painful year for bond investors, but long-term valuations now look quite attractive, provided the government has learnt its lesson from the last few weeks of the importance of fiscal credibility in the eyes of global investors.